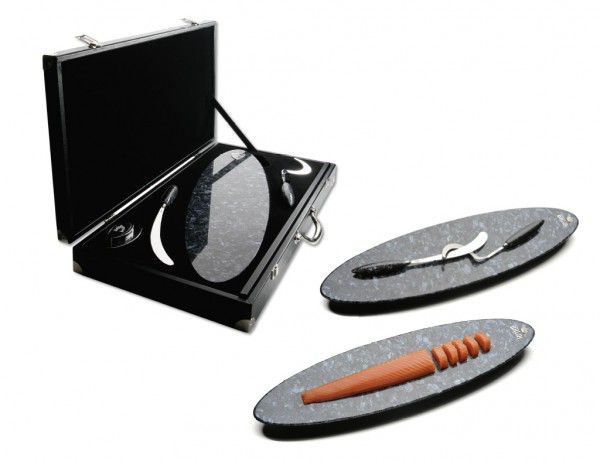 Description Reviews 0
Description
The Balik Fillet Tsar Nikolaj was first introduced back in 1984. Since then it has become a true...more
Close menu
Product information of "Balik La Parure du Tsar"

The Balik Fillet Tsar Nikolaj was first introduced back in 1984. Since then it has become a true great in the culinary world. Such a delicacy demands a special way of serving. Hans Gerd Kübel has developed the Parure du Tsar for the procedure of serving, which he wishes to be understood as both "practical" and yet a "treasure for the few".

The sickle
”I wanted to develop a device, an instrument with which, firstly, I can hold the Balik filet while cutting and which, secondly, acts as a guide for the knife and, thirdly, is able to present the medallions in a loving way.”

The sword
"The knife had to be designed such that the Balik fillet could be cut upright in a gentle, rounded cutting movement and so that the knife – when tilted sideways – could also lift the medallions".